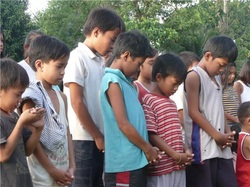 While praying, Ruby Soh received a vision of a sea of buckets, each bucket containing a Bible and basic necessities. She asked the Lord, "What is the meaning of these buckets?" The Lord replied, "I want you to take them to the poor in the country that you were born and to the ends of the earth.
From there on, Buckets For Jesus ministry was born and the inaugural mission took place in the Philippines in January 2010 followed by another one in April 2010 and monthly missions in Perth, Western Australia.

"The Spirit of the Sovereign LORD is on me, because the LORD has anointed me to preach good news to the poor. He has sent me to bind up the broken hearted, to proclaim freedom for the captives and release from darkness for the prisoners, to proclaim the year of the LORD's favour and the day of vengeance of our God, to comfort all who mourn, and provide for those who grieve in Zion-to bestow on them a crown of beauty instead of ashes, the oil of gladness instead of mourning, and a garment of praise, instead of a spirit of despair. They will be called oaks of righteousness, a planting of

the LORD for the display of his splendour." Isaiah 61:1-3